Will the death toll already at over 148, and more than 200 people still missing, this is going to be the worse natural disaster in New Zealand history. There has been more than 10,000 people a day leave the city and fly to the North Island and other places. There are tens of thousands homeless, and even more with shattered homes.

Truly the hand of God was on our family! We had arranged to go into the central city that day, but somehow we didn't get there. In the morning my parents asked if I was ready to go... we had business to attend to in Christchurch, so I looked out the window and thought a bit... should we or shouldn't we. The outcome was I decided we would leave it till the next day! It pays to live in the complete will of God... it can mean the difference between life and death!

We are all well, but preparing to lift our house now. We are trying to locate some huge poles to put under the floor. More details on this work later.

Thanks for all for your prayers and support. You are wonderful people and we are really blessed to call you friends!

With sincere thanks and blessings, 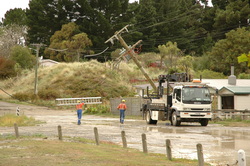 For the second time in less than 6 months my family and I have been terrified out of our wits! The earthquake struck at just before 1PM on the 22nd Feb' 2011. It was a 6.3 mag and at a depth of 5 kms.

We had just finshed lunch, and were washing up whem everthing began to wobble. I rushed outside and watched the road flexing. It looked just like the waves of the sea. Houses and fences were rolling. One higher than the other, then it would change and another house would become higher ot lower. Scary indeed! We raced to get our vehicles out of the garage and head for higher ground. The threat of tidal wave was high. One hour later we returned to our home at the beach after being told it was safe to do so.

Our house was still intact, but had sunk further. The Sept 4th quake last year had caused a lot of damage, and we had only just finished the rebuilding process. Now we need to start again!!!

But by the grace of God we shall win through. There are a lot of people worse off than ourselves. We have a badly damaged house, but some people have lost their homes, and in many cases, they have lost their lives.

Thanks to all of those who are praying for us at this time. We are most grateful and blessed to know you are thinking of us.

Your fellow believer in Jesus Christ Our Lord.